Read all about Kathi's weekend of adventure in North Berwick and Dunbar, which included wildlife watching, water sports, mindfulness and much more!

East Lothian  has got it all!

Be inspired by Kathi's itinerary and plan your own wild escape to the east coast of Scotland. 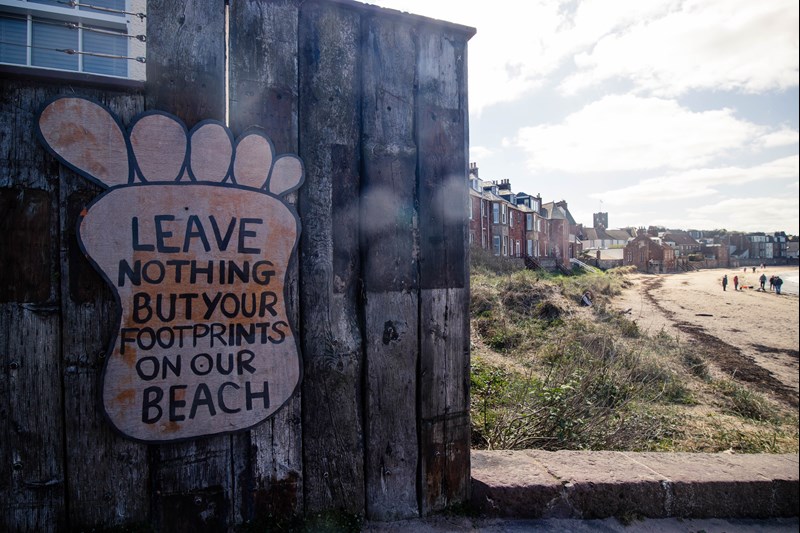 Not every adventure has to lead you to far-away places. Less than an hour west of Edinburgh lies the beautiful East Lothian coast.

From Dunbar and East Linton to North Berwick and Gullane, East Lothian has a lot to offer. Boasting a mix of sandy beaches, rocky outcrops that are inhabited by seabirds, colourful harbour towns, rural farmland and volcanic hills, this region is full of potential for adventurous travellers who are looking for a wild escape from the city.

How’s that for a wild escape for a weekend getaway?

I recently explored this part of Scotland’s easy coast on a solo trip with Wild Scotland, an organisation that promotes sustainable and responsible adventure tourism in Scotland.

Over two days, I got to try some adventurous things to do in East Lothian, feel the warm welcome of local businesses in the area, learn new skills and knowledge, and spend some me-time.

Nothing recharges your batteries quite like a weekend by the sea!

Things to do in East Lothian that Inspire Adventure

The East Lothian coast might be famous for its surplus of golf courses, but when it comes to things that come in big numbers, you simply can’t beat the bird colonies. Seabirds come to this coast in astounding numbers to nest and rear their young. 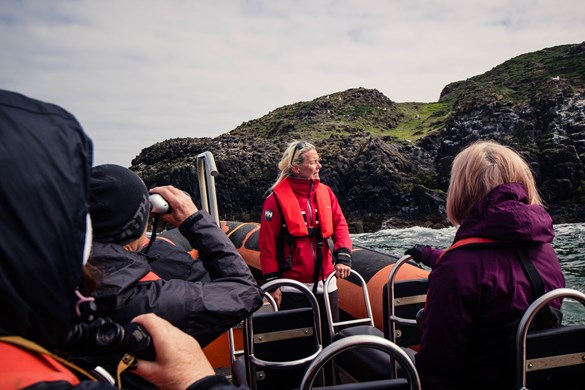 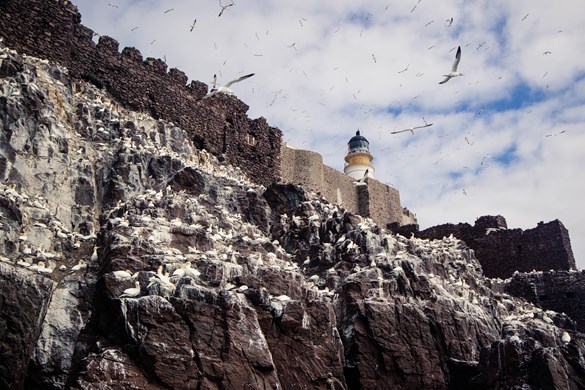 Atlantic puffins, northern gannets, guillemots, fulmars and eider ducks – they are among the birds you can see on a seabird safari with the Scottish Seabird Centre. Their boat trips leave from North Berwick and include landing trips to the Isle of May (best to photograph puffins), landing trips to Bass Rock (to walk among nesting gannets) or cruises to some of the other islands in the Firth of Forth.

If you only have an hour or two, the Three Island Seafari takes about 75 minutes and sails around Lamb, Craigleith and Bass Rock. I joined this tour and saw cormorants, guillemots, puffins, kittiwakes, eider ducks, shags and all kinds of gulls.

The star of the show though, was the UK’s largest colony of Northern gannets (apart from St Kilda). Every year, they flock to Bass Rock to nest in such numbers, the island turns white from the distance.

All along, our guide told us more about these birds, their behaviour and also what threats they face from pollution, declining fish stock due to overfishing and unsustainable fishing practices, off-shore wind farms and more.

If you can’t get onto a boat tour with the Scottish Seabird Centre, check out BlueWild Nature Boat Tours, who are also a Wild Scotland member and offer boat trips from Dunbar and North Berwick. 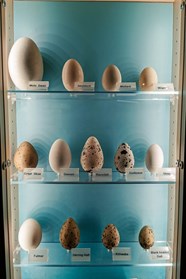 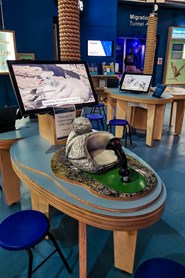 If the boat trip inspired you to learn more about Scotland’s precious marine environment, head to the Scottish Seabird Centre and visit the Discovery Experience.

Scotland has the longest coastline in Europe and provides some of the most important habitats for marine species in the shape of deep sea coral reefs and kelp forests. The Discovery Centre takes you on a journey to learn more about these things through exhibits, a movie theatre and several interactive elements.

Computer games convey biological facts, for example about the fulmar’s defence mechanisms, or societal issues, such as how policy affects the wellbeing of human communities and seabird colonies alike.

Live cameras on the Isle of May and Bass Rock give everyone the opportunity to see what the nesting birds are up to. And with the help of VR goggles, you can explore Scottish reefs and kelp forests underwater.

At the Seabird Centre you’ll also find a cafe and a shop with great marine-themed gifts and trinkets.

North Berwick Law is impossible to miss – it’s the pointy peak that rises at the edge of the town. From the top, you’ll get stunning views of North Berwick, the coast and the islands off-shore.

The Law is made from volcanic rocks and has survived the relentless grind of glaciers, which formed the deep sea trenches that lie between the coastline and Bass Rock today.

Since the early 18th century, the summit of the Berwick Law has been marked by a whale’s jawbone. In 2008, it was replaced by a replica due to safety concerns, but to this day, it’s a famous landmark in the area.

The hike is just over 4 miles and takes 2-2.5 hours. Find a full walk description here.

In a way, the East Lothian coast is just a glorious string of golden sandy bays. Seacliff Beach between North Berwick and Dunbar is no exception!

Seacliff offers stunning views of Bass Rock on the horizon and the ruins of Tantallon Castle across the westerly bay.

The beach has even caught the eyes of Hollywood location scouts and has been used in films and TV shows from Outlander to Mary Queen of Scots (2018).

Seacliff beach lies at the end of a narrow private road. It costs £4 to park there for the day, but sometimes the gate is open and you can head down there for free.

Discover the ruins of Tantallon Castle

Visiting a castle ruin is always an adventure. Tantallon Castle sits high on a cliff edge and is an outstanding example of 14th century castle architecture in Scotland. The castle was protected by just one high wall which faced the land. The other three sides were surrounded by the sea.

The castle was once the seat of the Red Douglases and over the centuries it was besieged and severely damaged multiple times. And yet, much of the protective curtain wall still stands today.

At the castle site, you can enjoy the views of Bass Rock, learn about recent archaeological digs and look out for seabirds from nearby colonies. 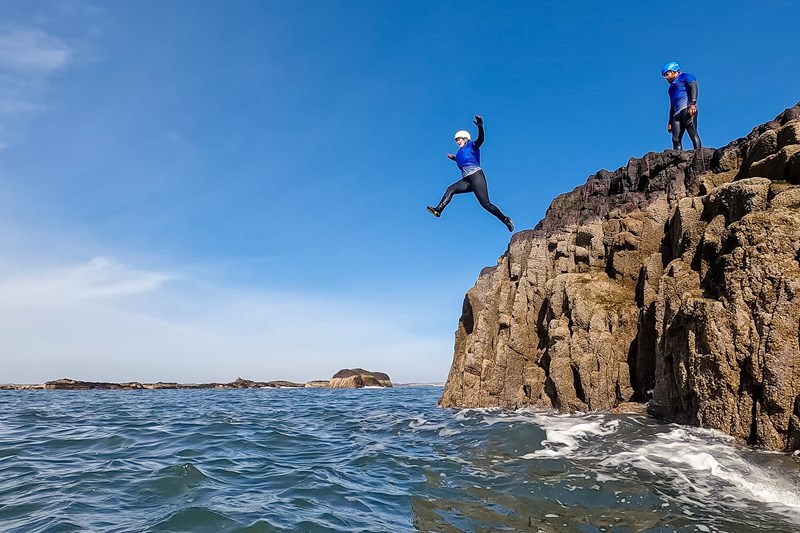 When it comes to adventurous things to do in East Lothian, look no further than Ocean Vertical!

This outdoor company offers ethical adventures on land and in the water that won’t harm the environment and allow you to feel connected to the landscape. Join them in Dunbar for a surf lesson, a session on paddle boards, SUP yoga or coasteering.

Not sure what coasteering is?

Coasteering is an immersive way to explore the coast up close. You’ll swim in the ocean, climb over rocks and – if you like – jump in as well. You may come across caves or stone arches, you may find holes in rocks that were caused by erosion, or discover the diversity of life in a rockpool.

Coasteering is all about getting you up close with the coastal environment, with a splash of adventure. 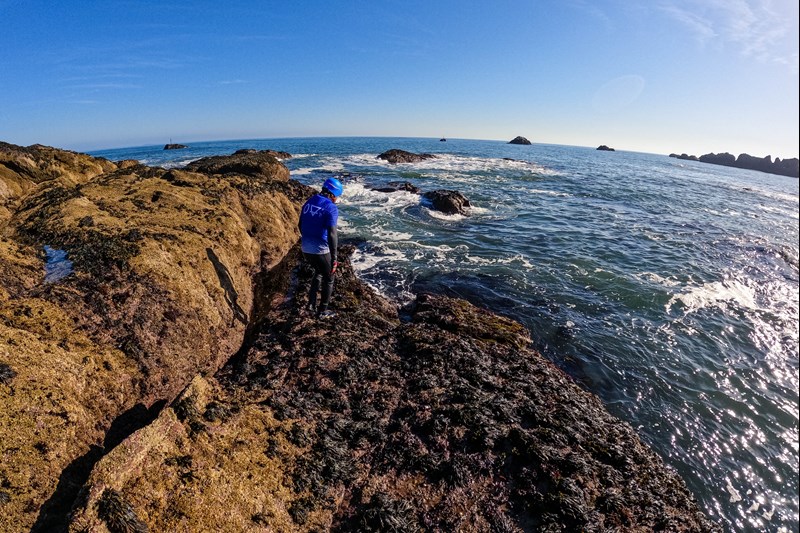 One of the highlights on the beach is the Bridge to Nowhere. At low tide, it crosses the shallow stream of the Biel Water, connecting the two sides of the beach. But at high tide, it is surrounded by water, seemingly a “bridge to nowhere”.

Belhaven Bay is part of the John Muir Country Park – yes, that John Muir – so you could spend all day here, walking through the park and taking in different habitats.

Dunbar is a stunning small town on the East Lothian coast.

Start your walk on the Dunbar Clifftop Trail at the Dunbar Leisure Pool and walk west. You’ll go from one bay to the next, discovering beautiful red sandstone cliffs, spotting seabirds and wild flowers.

The path leads along the golf course (watch your head!) to Belhaven Bay and the Bridge to Nowhere (see above).

Backtrace your steps, or follow quiet streets back to the centre of Dunbar. Browse the independent shops on the High Street, visit the colourful harbour, marvel at the remains of Dunbar Castle and enjoy the scenic views from Dunbar Battery.

Seacliff beach is not the only Outlander film location in East Lothian!

A few miles inland from North Berwick and Dunbar lies East Linton, a small and unassuming village with a pretty high street, but only a handful of local businesses.

On the outskirts of East Linton, you can find Preston Mill, a unique watermill on the River Tyne. Its Dutch-style architecture dates back to the 18th century, although there has been a mill on this site for hundreds of years before that.

The mill was commercially used until 1959. Today, you can visit it on a guided tour and see the millstones and iconic waterwheel in action.

Its picturesque setting was used as a film location for Outlander season 1. As a result, Outlander fans donated money to repair the mill after a 2019 flood damaged the building.

After the mill tour, go for a walk along the River Tyne and find the 16th Phantassie Doocot which once housed 500 pigeons.

And finally, if you’re a woman looking for a unique way to immerse yourself in the East Lothian landscape, check out the restorative retreats with WanderWomen.

WanderWomen retreats are all about finding the simplicity in hiking and camping, and adding activities that nurture mindfulness and wellbeing, such as yoga, outdoor swimming, barefoot walking, journaling and fire making.

The retreats are overnight camping experiences for women that take place in different locations across East Lothian.

East Lothian Travel Guide
Getting there

Many locations in East Lothian are easily accessible by public transport. There is a train line that connects Edinburgh and North Berwick, and another going from Edinburgh to Dunbar.

Both towns are excellent home bases to explore the area by using local buses.

Of course, you can also drive to East Lothian, but note that parking in these small coastal villages is extremely limited. 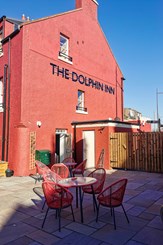 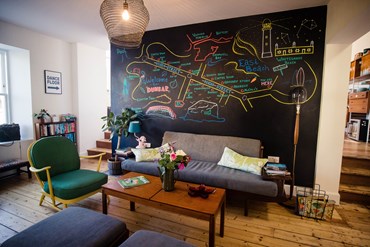 I stayed at the charming Dolphin Inn in Dunbar – a hostel with a twist.

Throughout, the hostel has been lovingly decorated with carefully curated items, without ever losing sight of functionality and creature comforts. eleven rooms offering a mix of double, single, family and traditional hostel-style bunk accommodation.

Most rooms share bathroom facilities with others, but there are also en-suite rooms available. The common kitchen, dining area and comfy lobby have everything you need for a quiet night in.

The hostel is centrally located at the far end of Dunbar’s high street. From there, it’s just a short walk to the shops, attractions and restaurants of Dunbar, or to the beach. The Dolphin Inn is a great spot for surf enthusiasts and your hosts can point you to the best surf locations along the coast.

East Lothian offers a larder full of local produce and delicious eateries. Here are some of my favourites:

With all this in mind, nothing stands between you and a wild escape to the East Lothian coast.

I hope that this guide to adventurous things to do in East Lothian has inspired you to pack your bags and nurture your need for freedom and adventure around the corner from Edinburgh.

Which activity entices you the most?