Explore Your Boundaries - Cycling the Boundaries of Scottish Councils

The Explore Your Boundaries concept was born just as the second lockdown had been announced in Scotland. Physical exercise outdoors was still possible, but with the caveat that any such activity would have to start no more than five miles outside of the local authority in which people lived. Mark and I had cycled a number of times together since November that year, often exploring the weird and wonderful sites off the beaten track that Edinburgh offered us. Storytelling was a large part of our motivation for those rides, and the weekly rides helped to keep us focussed while any international adventures were off the map. Mark and I have been Edinburgh residents for a while. But when the restrictions were announced, we both didn’t exactly know where the boundary of Edinburgh lay. 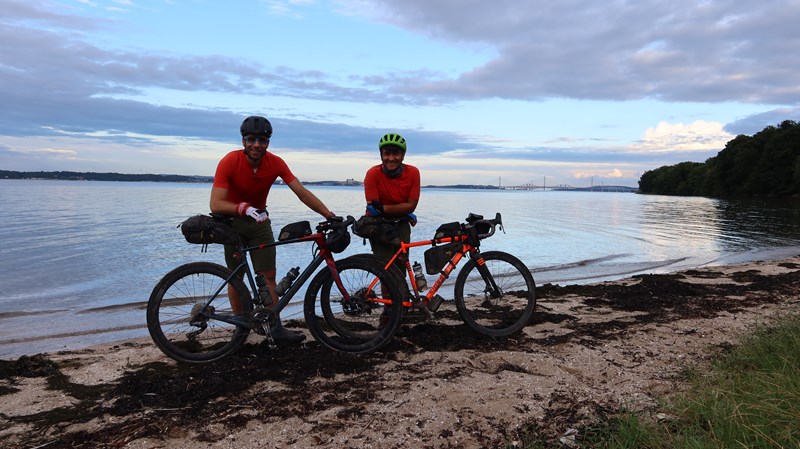 A quick Google search pointed me in the direction of a file with the boundaries of all local authorities in Scotland, and Komoot, a route mapping app we both use for planning our rides, helped turn the boundary into a route for gravel bikes. The app, based on open-source Open Street Maps data, automatically picked a route suitable for this type of cycling when I uploaded the boundary as a GPX-file, which made the first step of creating the route much easier. Like in any route mapping project I have worked on through Bikepacking Scotland, this first route still needed some manual adjustments. This is where the Google satellite and Open Cycle Map layers in Komoot helped, as I could determine how suited some paths were for gravel riding. Another really helpful tool was the Heritage Paths website, a great archive of historic routes and maps from Scotways, the Scottish Rights of Way & Access Society.

As soon as I had mapped the final route, I called Mark and we decided to ride Edinburgh’s boundary. The conditions were far from ideal. Whiteout conditions at the very start provided the snow for stunning pictures, but also made for tricky cycling conditions. Some paths had become ice rinks with the constant thawing and freezing, and so the 64 miles took much longer than expected. Arriving at the Newhaven lighthouse, where we started at 7am in the morning, we both agreed that our ride had been much more of an adventure than we initially expected. And we wanted to share our experience and inspire others to do the same. 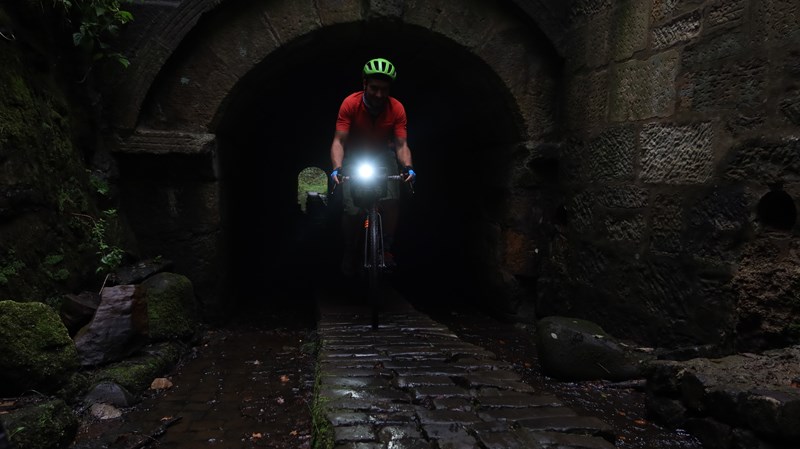 The response on social media was encouraging. People across Scotland used the routes to inspire their own adventures, starting and finishing at their front door. Craig Thopmson sent us pictures and a route around Aberdeen, and the final collection of routes included 25 different routes across Scotland. Inspired by the success we came up with the idea to cycle more routes in Scotland and produce a documentary film once restrictions had been lifted. With Clackmannanshire Council, Visit East Lothian and Visit Falkirk we found three DMOs that supported the project, and matched the funding with sponsorship from Schwalbe Tyres UK.

Riding the routes not only allowed us to see Scotland with a different set of eyes, it also helped to promote responsible access to the Scottish countryside. After we had finished riding the boundaries of Clackmannanshire, East Lothian and Falkirk we used COP26 as an inspiration to cycle the boundary of Glasgow during the UN summit. While we had accommodation arranged for both East Lothian and Falkirk, and cycled Clacks in a single day, we used our ride in Glasgow to promote responsible camping as well. We partnered with Scottish outdoor company Vango to provide us with sensible equipment to camp in the middle of November, and were pleasantly surprised how much ‘wilderness’ there was on a route we had envisaged to be very urban.

While the Clackmannanshire ride was at 49 miles the shortest of our four rides, it was pretty hard. The Ochil Hills provided a stunning playground to ride bikes, but they also drop steeply into the valleys on both sides. To the north towards Gleneagles and Auchterarder; to the south to the Firth of Forth. The steep climbs were rewarded with extraordinary views from the top. And trying to find cycle paths and good cycleways between the villages and towns made the Clackmannanshire route one of two halves - the Ochil Hills and the wilderness and then the small towns and labyrinths of roads through the valley floor in the Firth of Forth. 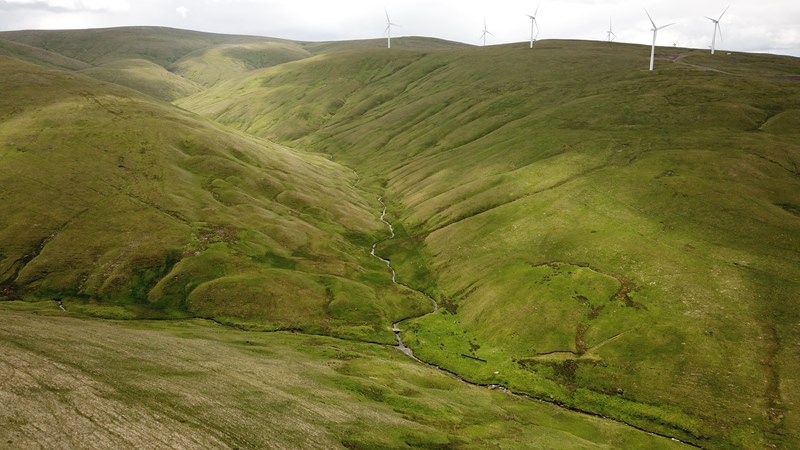 Next up was East Lothian, a route that wasn’t easily cycled in a day, while simultaneously filming the ride. We opted to tackle East Lothian in two days, and it meant a beautiful overnight stay in Dunbar, a town which we both hadn’t explored properly. Whilst we were familiar with the beaches and parts of the John Muir Way along the coast, the Lammermuirs  provided us with surprisingly empty sections of high ground and a great network of old trading routes like the Herring Road. 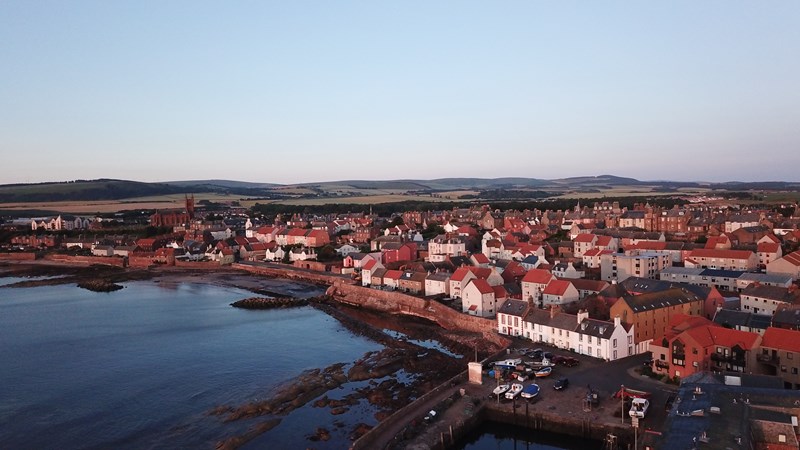 In early fall we enjoyed the variety of riding on the Falkirk boundary. The challenging sections around Torwood, the really relaxed sections along the canals and the Firth of Forth and some great gravel tracks provided an adventure that was highly satisfying. The route was also full of great historical sites like Tappoch Broch, Blackness Castle, James Watt's Cottage at Kinneil Estate and the remains of the Antonine Wall, so was a perfect opportunity to dive more into Scotland’s history. 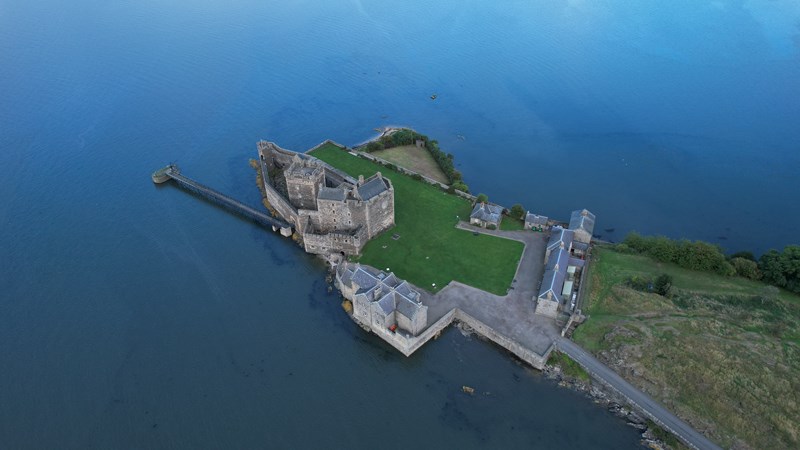 Explore Your Boundaries gave us adventures close to home, easily accessible by public transport, and allowed us to appreciate Scotland in new ways. I could use my own words, but Mark’s quote from the film is perfect to wrap this blog.

‘So many of those routes have allowed me to appreciate home, to see parts of Scotland. You'd never say to the family let's go and explore there. But this idea of having a concept to follow a route, to follow a line, I think it's an interesting concept to actually limit your options. Normally you say with adventure, let's go anywhere. But all you end up doing is going to the really familiar, obvious places. So actually creating a concept which limits your options and forces you to follow a line, I think it's actually quite a neat idea. To find the things that you otherwise would never find.’ 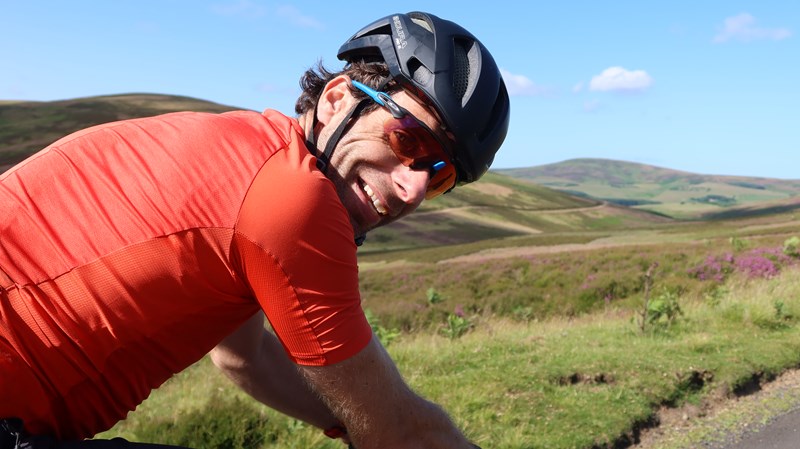